The following article by our Medical Director, Dr Jack Philpott, appeared in the December 2012 edition of Medicus Journal.

Chronic insomnia, defined as poor nocturnal sleep and impairment of daytime functioning of more than six months duration (International Classification of Sleep Disorders, ICSD-2), has an estimated prevalence rate of 10-20 per cent among the general population. Several studies have shown that insomnia once established exhibits a chronic course with 60 per cent of patients having persistent symptoms at two-year follow-up. More severe symptoms at onset predict a more chronic course. Mild insomnia is also known to worsen over time stressing the importance of early intervention.

Patients complain of daytime impairment including mood disturbance, concentration problems, easy fatigue and excessive sleepiness during the day. Objective measures reveal that patients have difficulty with memory, motor control and vigilance. This has negative impacts upon quality of life. There is a bidirectional relationship between depression and insomnia with patients with chronic insomnia scoring high on depression scores. Comorbid insomnia related to depression is also a marker for more treatment-resistant depression.

Currently insomnia is generally managed with the use of pharmacotherapy although there is no evidence that this is effective over the long term. The gold standard treatment for insomnia management, with over 100 peer-reviewed journal articles, is Cognitive Behavioural Therapy (CBT). This is generally administered by a psychologist, however access to such services is limited.

There have been several studies looking at novel ways of administering CBTi in General Practice using practice nurses, trained and supervised by a Clinical Psychologist, and the use of web-based resources. We have looked at using Sleep Technologists supervised by an experienced Clinical Psychologist in administering CBT to patients referred to us with a variety of sleep disorders including insomnia, obstructive sleep apnoea and circadian rhythm disturbance.

Insomnia is classified as either primary or comorbid. In the ICSD, primary insomnia is classified into psychophysiological insomnia, paradoxical insomnia (state misperception), idiopathic insomnia or insomnia due to poor sleep hygiene. Comorbid insomnia can be secondary to other sleep disorders such as restless legs or obstructive sleep apnoea, psychiatric illnesses such as depression or medical conditions such as cancer and chronic pain. CBT has been shown to be effective in both primary and co morbid insomnias.

Sleep onset and sleep maintenance is a complex process involving interaction between the pons, thalamus, ventrolateral preoptic (VLPO) area, frontal cortex and basal ganglia. There are numerous projections from the pons to the thalamus, basal forebrain, lateral hypothalamic area and to the wider cortex that regulate state between wakefulness, non-REM and REM sleep.

The VLPO may act as the switch which facilitates a change in state from wakefulness to sleep. There must be a process that represents the accumulation of wakefulness or sleep that trips the switch (for a more comprehensive review see M Perlis, W Pigeon et al; Sleep medicine Clinics, Biology of Sleep Vol7 No 3 Sept 2012: 545 -554).

Pathology at any of these sites could lead to subjective complaints of sleep disturbance. If arousal persists in the pons for example, the patient may report an inability to initiate and maintain sleep, feeling alert while desiring to fall asleep. Lesions in the thalamus, which regulates the flow of sensory information to the cortex, could lead to more sensory information reaching the cortex and thus increasing processing during sleep resulting in hyperresponsiveness to environmental stimuli. This may account for so-called “light sleepers”.

The frontal cortex is involved in the cognitive process of working memory and problem-solving and persistent activity in the frontal cortex might lead to excessive worry and ruminations, which may interfere with sleep onset and sleep maintenance. The basal ganglia are the punitive site for the sleep homoeostatic. Lesions within the basal ganglia may be related to the homoeostatic dysregulation that occurs in insomnia. There may be a biological basis for many of the subjective complaints patients with chronic insomnia experience. Functional neuro-imaging offers a promising technique to further explore these possibilities.

Traditionally insomnia has been treated with pharmacotherapy. Over the short term this can be effective, however there is no evidence of long-term efficacy of such agents for chronic insomnia. There is increasing evidence that benzodiazepine is associated with significant risk of falls, motor vehicle accidents and accelerated cognitive decline particularly in the elderly. Short-acting agents are more likely to result in rebound insomnia whereas longer-acting agents can result in hangover and morning lethargy. A psychological dependency can occur over time as attempted drug withdrawal results in rebound insomnia reinforcing dependency. Newer melatonin receptor agonists (Ramelteon) offer some promise with less potential for adverse outcomes and dependency.

Psychological therapy in the form of CBTi has been extensively investigated over the last 25 years. Nine meta-analyses show that CBT is associated with improvement in 70 per cent of patients and that improvement is sustained for at least six months post treatment. CBT targets the dysfunctional and maladaptive behaviours and thoughts that otherwise maintain insomnia. Key components of CBT include stimulus control, progressive muscular relaxation, biofeedback, paradoxical intent therapy, sleep restriction and cognitive restructuring.

Although the literature clearly supports the role of CBTi for the management of chronic insomnia, practical problems remain in terms of access. There are limited numbers of appropriatelytrained therapists. Many patients with insomnia can be managed by less experienced, but appropriated supervised therapists with referral onto more specialised therapists if treatment fails. We have investigated the possibility of using Sleep Technologists in this role and recently presented data on our first 61 patients. Research from other groups suggests that CBT can be given by clinical nurses in the general practice setting. We have used a team-based approach involving a Clinical Psychologist, Sleep Physician and Sleep Technologists/Therapists.

When entering the program patients keep a sleep diary and object measurement of sleep is made using wrist actigraphy. This allows objective measurement helping to rule out circadian rhythm disturbances. It also allows easy assessment of treatment response. We have generally found that four to six treatment sessions delivered on a weekly basis are sufficient for the majority of patients achieving a significant improvement in sleep efficiency and subjective sleep reports using standardised questionnaires such as the Insomnia Severity Index. Actigraphy can also be useful in monitoring adherence to behavioural treatment recommendations as this is generally the most common reason for treatment failure. Subjective results from a patient presenting with sleep onset and maintenance insomnia. She had seven sessions of CBTi:

Testimonial from patient: “I participated in CBT in November 2011 to January 2012. Before beginning the therapy I had developed fairly severe insomnia. Some nights I managed two to four hours, with the occasional night of no sleep. Sleeping tablets had not really worked nor offered a plausible longterm solution. I decided to try CBT. The process took about two months, but had me sleeping much better by the end. My sleeping has remained fairly good since that time, averaging seven to eight hours per night.” Subjective results from 40 patients treated as per protocol. Graphs show mean data taken from sleep logs and questionnaires: 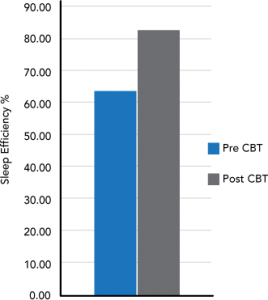 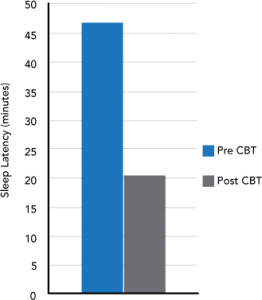 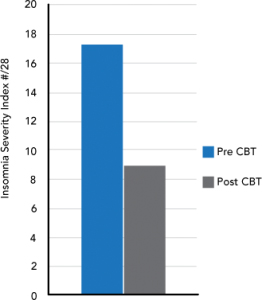 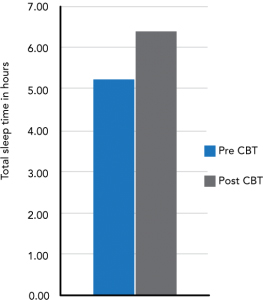 We are currently investigating the possibility of delivering CBTi via tele-medicine. This is an exciting opportunity particularly for rural and remote patients who do not have access to therapists in their local community.